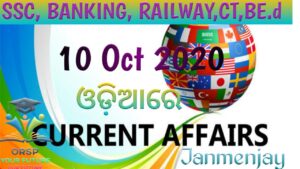 World Post Day is observed on 9th October every year.

Oil prices rose as oil workers evacuated rigs in the U.S. Gulf of Mexico ahead of Hurricane Delta.

In the trying times of Covid-19 pandemic during which the demand for oxygen shot up to unprecedented levels, Uttar Pradesh Chief Minister Yogi Adityanath inaugurated the state’s largest oxygen production plant in Modinagar, Ghaziabad.

The Reserve Bank of India in its bi-monthly Monetary Policy statement issued has maintained a status quo keeping the key interest rates unchanged.

Vistara and Axis Bank launched a co-branded forex card that can load up to 16 currencies.

The 2020 Nobel Prize for Literature has been awarded to American poet Louise Glück.

Union minister Ram Vilas Paswan passed away in New Delhi. He was 74.

2.Which of the following part of the world has been affected by hurricane Delta?Korean peninsula

5.The Reserve Bank of India in its bi-monthly Monetary Policy statement kept the key interest rates unchanged. The current repo rate stands at ________.

6.Which of the following banks has recently launched an online Business Mentoring Programme ‘MSME Prerana’, for MSMEs?

7.Which of the following bank has launched a co-branded forex card with Vistara  airlines that can load up to 16 currencies?

9.Who among the following bank has been appointed as the managing director (MD) and Chief Executive Officer (CEO) of India Post Payments Bank?

10.Who among the following has won the Nobel Prize for Literature 2020?