MCQ-1
In which state ‘Maa’ scheme has been launched to provide meals at
₹5 to poor people?

In West Bengal ‘Maa’ scheme has been launched to provide meals at ₹5 to poor people
On the lines of Amma Canteens in Tamil Nadu and Ahar Yojana of neighbouring Odisha, the
Mamata Banerjee-led government is launching ‘Maa’ scheme in poll-bound West Bengal
recently to provide subsidised cooked food to the poor.
Sixteen common kitchens have been opened in Kolkata, where the new scheme is being
launched initially. As per media reports the food per plate containing rice, dal, cooked vegetable
and an egg would cost ₹5. The food would be available at a fixed time, officials said.
During the presentation of the state’s interim Budget on February 5, the Chief Minister said ₹
100 crore was being set aside for the ‘Maa’ scheme. She also said free rations to people
distressed because of COVID-19 will continue even after June 2021 for which ₹ 1,500 crore has
been allocated.
West Bengal is a state in the eastern region of India along the Bay of Bengal. The State was
established on 26 January 1950. Governor of West Bengal is Jagdeep Dhankhar and Chief
Minister is Mamata Banerjee.

In Uttar Pradesh “Abhyudaya scheme” has been launched recently.
“Abhyudaya scheme” was inaugurated by UP CM Yogi Adityanath
The government of Uttar Pradesh has started free coaching for JEE and NEET aspirants
under the Abhyudaya scheme, which was launched recently. All study materials and
classes will be available online for the students.
In an effort to help students preparing for several competitive examinations during the
Covid-19 pandemic, the Uttar Pradesh government has launched this scheme. This
scheme aims at providing quality guidance and teaching to all aspirants coming from
diverse backgrounds like rural areas, poor families and marginalised sections, who are
not able to afford and avail private coaching services.
There will be separate classes for NEET and Joint Entrance Examination (JEE) for
admission into the IITs. All the lectures and complete study material will be made
available online.

MCQ-3
In which city first route of Water Metro project has been
inaugurated? 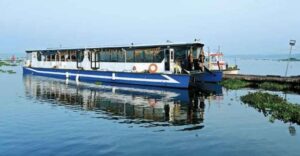 In Kochi city first route of Water Metro project has been inaugurated.
Chief minister Pinarayi Vijayan inaugurated the first route and terminal buildings of
Kochi Water Metro. “Water Metro is an affordable and environment friendly transport
system.
The ₹747-crore Water Metro project of Kochi Metro Rail Limited (KMRL) would
emulate Kochi Metro as yet another innovative and sustainable mode of urban
commuting in Kochi, providing an eco-friendly and accessible transportation mode,
especially for people living in 10 islands off the mainland. The 520 km long first phase
of the national waterways dedicated to the nation. The first route is (Vyttila-Kakkanad)
of the project.
Kerala Chief Minister Pinarayi Vijayan also inaugurated three of the most awaited
projects of Kochi Metro Rail Limited (KMRL) through video conferencing.
Along with the first Kochi Water Metro route (Vyatilla – Kakkanad) and terminals, CM
of Kerala also inaugurated Panamkutty bridge and Integrated Urban Regeneration and
Water Transport System (IURWTS).

MCQ-4
Which among the following celebrated its 74th foundation day
recently?

On 16th February Delhi Police following celebrated its 74th foundation day recently.
The Delhi Police is the law enforcement agency for the National Capital Territory of
Delhi. Delhi Police comes under the jurisdiction of the Ministry of Home Affairs (MHA).
An organised form of policing was established by the British after the first war of
freedom of 1857, with the adoption of the Indian Police Act of 1861. Delhi being a part
of the Punjab, remained a unit of the Punjab Police even after becoming the Capital of
India in 1912. In the same year, the first Chief Commissioner of Delhi was appointed
and was vested with the powers and functions of the Inspector General of Police.
Delhi Police was reorganised in 1946. In the wake of partition, a large influx of refugee
population rolled in and there was a sharp rise in crime in 1948. It was on February 16,
1948 that the first IGP of Delhi was appointed
At present Chief of Delhi Police is Shri S. N. Shrivastava (IPS) officially called as
Commissioner of Delhi Police is the head of Delhi Police.
Shanti Seva Nyaya (शाोंलत सेवा न्याय) is the motto of Delhi Police.
ADDITIONAL INFORMAITON
.
MCQ-5
Who has launched the “e-Chhawani” portal recently?

Rajnath Singh has launched the “e-Chhawani” portal recently.
Defence Minister Rajnath Singh recently launched an online portal that aims
to provide online municipal services to more than 20 lakh citizens across 62
Cantonment Boards through a multi-tenancy central platform. The
‘e-Chhawani’ portal was launched in the presence of Chief of Defence Staff
General Bipin Rawat in Delhi.
Now residents of cantonment areas can register their complaints regarding
civic issues and resolve them while sitting at home. “Our government is
committed to refine the system and improve the Ease of Living for people.
With this portal, municipal services will be easily provided to the people. They
can get their documents like trade licence, sewerage connectivity applications
can be made through the porta.
The portal is a step towards smart governance to provide citizen-centric
services to residents of Cantonment areas across the country.
Cantonment area is a permanent military station
where units of an army may be stationed for
longer durations than they are during advances
and retreat. Not only cantonment areas are pride
of the region but they have also played important
role in the development of the community.
Kanpur Cantonment is the largest cantonment in
India, both by area and population.
ADDITIONAL INFORMAITON
MCQ-6
Recently CM of which state Launched Fibre Optic Network for
Free Internet Access To 20 Lakh Families?

Recently CM of Kerala state Launched Fibre Optic Network for Free Internet
Access To 20 Lakh Families.
To bridge the digital divide by providing high-speed, affordable internet
connectivity to every household, Kerala Chief Minister Pinarayi Vijayan recently
launched the KFON (Kerala Fibre Optic Network) in the state. KFON will
revolutionise the digital space.
With KFON, free internet connectivity will be provided to 20 lakh BPL families. It
will also cover villages in all 14 districts. Earlier only 10 per cent of government
offices had high-speed Internet, with the launch of KFON, 30,000 government
institutions will have high brand width connectivity.
KFON is a joint venture of Kerala State IT Infrastructure Limited and Kerala State
Electricity Board (KSEB). A consortium led by Bharat Electronics Limited (BEL) was
selected to implement the project in March 2019.
ADDITIONAL INFORMAITON

.
MCQ-7
To whom The United Nations Capital Development Fund (UNCDF) has
appointed whom as its Executive Secretary recently?

S. Theodore Baskaran has won the “Sanctuary Lifetime Service Award”- 2020
S. Theodore Baskaran is a writer, a historian, a naturalist and an activist. He is an Indian film
historian and a wildlife conservationist.
Sanctuary Wildlife Awards are given by Sanctuary Nature Foundation. The Sanctuary Wildlife
Awards were instituted in the year 2000 to recognise and draw national attention to the
contribution of individuals working for the protection of wildlife and natural habitats in India.
After selection process, 10 winners from all walks of life are selected as the recipients of one of
eight prestigious titles: The Lifetime Service Award, Five Wildlife Service Award, A Green
Teacher Award, and The Young Naturalist Award.
ADDITIONAL INFORMAITON
.
MCQ-9
HCL Tech has signed an agreement with which among the
following to boost capabilities in cybersecurity?

HCL Tech has signed an agreement with IIT Kanpur to boost capabilities
in cybersecurity
As part of the pact, the IT company will work with C3iHub, a specialised
cybersecurity research centre at IIT Kanpur (IITK).
This collaboration will bring together the country’s brightest minds,
advanced research capabilities and global resources to develop
advanced solutions in the area of cybersecurity. HCL and IITK will bring
in real world industry exposure to carry out joint initiatives and
research.
HCL Technologies is an Indian multinational technology company that
specializes in information technology services and consulting,
headquartered in Noida, Uttar Pradesh, India. It is a subsidiary of HCL
Enterprise. HCL Technologies was founded in 1976
ADDITIONAL INFORMAITON
.
MCQ-10
Kaladan Multi-Modal Transit Transport Project is in news nowadays.
This project is being built between______.

Kaladan Multi-Modal Transit Transport Project is in news nowadays. This project is
being built between India-Myanmar
External Affairs Minister S Jaishankar recently informed that the Kaladan Multi-Modal
Transit Transport Project is getting the final push.
Kaladan is in a very difficult part of Myanmar. There were a lot of logistical challenges
even to get to the place. The US $484 million projects will connect the Kolkata seaport
with the Sittwe seaport in the Rakhine State of Myanmar by sea. In Myanmar, it will
link the Sittwe seaport with Paletwa in the Chin State via the Kaladan riverboat route,
and then from Paletwa by road to Mizoram. The project was originally scheduled to be
completed by 2014.
ADDITIONAL INFORMAITON

Which Indian state is the largest in terms of the total area
covered ? (SSC CGL 2017)

MCQ for you all to answer