Q2) India will host its first-ever ‘Internet Governance Forum’ in October. What is the theme of this forum?
A. Inclusive Internet for Digital India B. Together for a better internet
C. Create, Connect and Share D. A better internet starts with you

Q3) The Athletics Federation of India (AFI) has decided to name which date as ‘Javelin Throw Day’ in India to honour Neeraj Chopra?
A. August 8 B. August 7
C. August 9 D. August 6

Q6) In order to achieve the goal of self-reliance in India’s satellite-based navigation sector, ISRO has drafted which policy?
A. SATNAV Policy 2021 B. GATSAV Policy 2021
C. NATSAV 2021 D. VATEGET 2021

List of Global Navigation Satellite System (GNSS):
● GPS: The Global Positioning System (GPS) is a satellite-based radio navigation system owned by the USA and operated by the United States Force.
● GLONASS: A Russian space-based satellite navigation system is a GNSS that provides an alternative to GPS and is the second navigational system with global coverage, freely available to all.
● Galileo: A global GNSS was created in 2016 by European Space Agency.
● BeiDou: The BeiDou Navigation Satellite System is owned and operated by the People’s Republic of China. It consists of two separate satellite constellations.

Q8) Who is the author of the book “A Different Route to Success”?
A. Lokesh Gupta B. Sudhanshu Nigam
C. Ramesh Narayan D. Ankit Jain

Q10) J&K’s Lieutenant Governor, Manoj Sinha, has flagged off which Cyclothon event from the shores of the Dal Lake in the run-up to the Independence Day celebrations?
A. Pedal for Dal B. Cycle for Dal
C. Show for Dal D. Stand for Dal 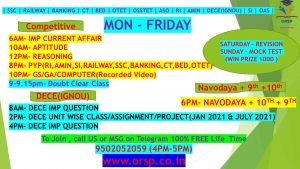 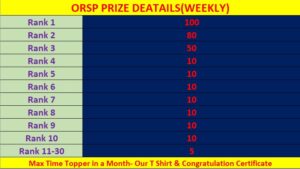