MCQ-1
World Day of Social Justice is observed on which day every year?

World Day of Social Justice is observed on 20th February every year.
Social justice is the view that everyone deserves equal economic, political and social rights and
opportunities. The theme of World Day of Social Justice -2021 is “A Call for Social Justice in the
Digital Economy”. The digital economy is transforming the world of work. Over the past decade,
expansion in broadband connectivity, cloud computing, and data have led to the proliferation of
digital platforms, which have penetrated several sectors of the economy and societies. Since
early 2020, the consequences of the COVID-19 pandemic have led to remote working
arrangements and allowed for the continuation of many business activities, further reinforcing
the growth and impact of the digital economy.
The United Nations’ (UN) World Day of Social Justice is annually observed to encourage people
to look at how social justice affects poverty eradication. It also focuses on the goal of achieving
full employment and support for social integration.
On 26 November 2007, the UN General Assembly declared that, starting from the 63rd session
of the Assembly, 20 February will be celebrated annually as the World Day of Social Justice.

Important Days and Events of February 2021

MCQ-2
Which among the following have planned to launch the World
Solar Bank?

MCQ-3
The annual interaction of PM with the students – “Pariksha Pe Charcha” will be
held online this year. In which year the first edition of the interaction was held? 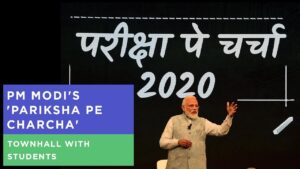 The first edition of “Pariksha Pe Charcha” was held in 1918.
Prime Minister Narendra Modi’s annual interaction with students ‘Pariksha Pe Charcha’ will be held online in this
year in view of the Covid-19 pandemic, Union education minister Ramesh Pokhriyal ‘Nishank’ informed recently.
The interaction with students from classes 9 to 12 ahead of their exams will be held in March. The registration for
the programme began on Thursday and it will conclude on March 14. Students who will get to ask questions will be
selected through a competition. The first edition of the prime minister’s interaction programme with school and
college students ”Pariksha Pe Charcha 1.0” was held at the Talkatora Stadium on February 16, 2018.
There are different topics assigned for students, parents and teachers in the contest. The applicants can also pose
their questions on this platform. The selected participants will be participating in the programme online from their
respective state and UT headquarters and will be presented with a special PPC kit (Pariksha Pe Charcha kit).

ADDITIONAL INFORMAITON
MCQ-4
Recently who has been sworn in as the Lt Governor of the
Puducherry?

A. Salim Gangadharan
B. Tamilisai Soundararajan
C. Murali Ramakrishnan
D. Ranjana Salgaocar
Tamilisai Soundararajan was sworn in as the Lt Governor of the Puducherry, the Union
Territory.
Telangana Governor Tamilisai Soundararajan, who was given additional charge of
Puducherry, was sworn in as Lt Governor of the Union Territory on Thursday. Chief
Justice of the Madras High Court Sanjib Banerjee administered the oath of office to
her at a simple function at the Raj Nivas. The Lt Governor took a guard of honour given
by the territorial police. Ms. Soundararajan is the fifth woman to hold the post of Lt.
Governor of Puducherry. Tamilisai Soundararajan replaced Kiran Bedi.
Velu Narayanasamy is serving as the 10th and current Chief Minister of the Union
Territory of Puducherry since June 2016.
Puducherry, also called Pondicherry, city, capital of Puducherry union territory, southeastern India. The city constitutes an enclave surrounded by Tamil Nadu state, on the
Coromandel Coast of the Bay of Bengal, 105 miles (170 km) south of Chennai.
Puducherry is a Union Territory of India, with four exclaved districts;
Puducherry district and Karaikal district (surrounded by the state of Tamil
Nadu), Mahé district (surrounded by the state of Kerala) and Yanam district
(surrounded by the state of Andhra Pradesh), with Pondicherry district
having the largest area …
ADDITIONAL INFORMAITON
MCQ-5
Recently which Union Minister addressed the inaugural
the ceremony of the third India Tourism Mart?

A. Arunachal Pradesh and Assam
B. Assam and Meghalaya
C. Meghalaya and Manipur
D. Manipur and Assam

Recently PM laid the foundation stone of India’s longest bridge which will connect Assam and
Meghalaya.
The Dhubri – Phulbari Bridge is a proposed bridge over the Brahmaputra River between Assam
and Meghalaya in North-East India.
The Dhubri – Phulbari bridge, planned to be completed by 2026–27, would be India’s longest
bridge over water and would span more than 19 km. This proposed bridge, close to the
Bangladesh border will connect Assam’s Dhubri with Meghalaya’s Phulbari which is also a
missing link of National Highway 127B. Civil works will start in 2019–2020. This is being funded
by Japan International Cooperation Agency and it would be executed by NHIDCL. This is one of
6 proposed bridges on the Brahmaputra.
ADDITIONAL INFORMAITON

MCQ-7
Recently Cabinet has approved PLI scheme for which sector?

Recently Cabinet has approved PLI scheme for Telecom Sector.
The Union Cabinet recently approved a production-linked incentive scheme for the
telecom sector. Briefing reporters after the cabinet meeting, Electronic and IT Minister
Ravi Shankar Prasad said, the production-linked incentive worth Rs 12,195 Crore has
been cleared for the telecom sector and this will create 40 thousand direct and
indirect employment.
Production Linked Incentive Scheme intends to promote manufacture of Telecom and
Networking Products in India and proposes a financial incentive to boost domestic
manufacturing and attract investments in the target segments of telecom and
networking products in order to encourage Make in India.
The Production Linked Incentive (PLI) Scheme is a Central Government scheme that
was notified in April 2020 for Large Scale Manufacturing to provide financial incentives
for domestic manufacturing of goods and also to attract large investments
ADDITIONAL INFORMATION

Recently 11th IEA-IEF-OPEC Symposium on Energy Outlooks held virtually from
Saudi Arabia.
Shri Dharmendra Pradhan, Minister of Petroleum and Natural Gas &Steel,
participated in the 11th IEA-IEF-OPEC Symposium on Energy Outlooks held
virtually on 17th February 2021 under the patronage of the Minister of Energy of
Saudi Arabia HRH Prince Abdulaziz bin Salman Al Saud.
The symposium saw the presence of heads of all top inter-governmental energy
agencies -IEF, IEA, OPEC, IRENA and the GECF. Also, dignitaries like, H.E. Norma
RocíoNahle García, Secretary of Energy, Mexico and H.E. Timipre Sylva, Minister of
State of Petroleum Resources of Nigeria participated in the event.
Apart from the comparative analysis of short, medium, and long-term energy
outlooks that OPEC and the IEA published in 2020, the trilateral symposium
reflected on the long-term outlooks of key producer and consumer countries.
ADDITIONAL INFORMAITON

Uttar Pradesh state has expanded Atal Bhujal Yojana in all of its districts.
‘Atal Bhujal Yojana’, the Centrally-sponsored scheme aimed at ensuring public
participation and improvement in Ground Water Conservation and
Management will be implemented in all districts of the state, the government
announced recently.
Following ‘Atal Bhujal Yojana’, success in the districts of Mahoba, Jhansi,
Banda, Hamirpur, Chitrakoot, Lalitpur, Muzaffarnagar, Shamli, Baghpat and
Meerut, the state government decided to implement the scheme in the
remaining 65 districts as well.
“Atal Bhujal Yojana” is a groundwater management scheme launched by Prime
Minister Narendra Modi on the 95th birth anniversary of former Prime
Minister Atal Bihari Vajpayee, on 25 December 2019. The purpose of the
scheme is to improve groundwater management in seven states of India.
ADDITIONAL INFORMAITON

MCQ for you all to answer
Taklamakan Desert is situated in –